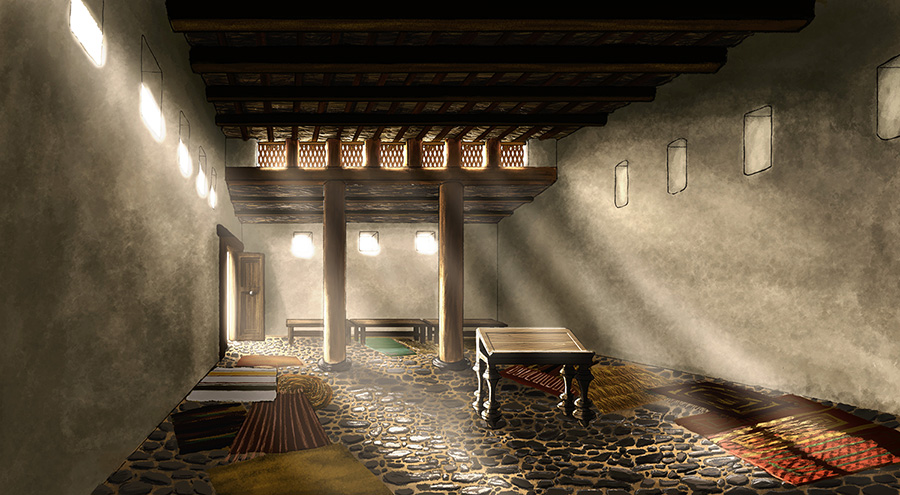 I’m currently writing the scene of Jesus’ first public teaching in the synagogue of Capernaum. It is a key moment in the next book, propelling his work as teacher and healer forward. But imagining how exactly this synagogue looked like is not an easy task. In this article, I summarize what I could find out about ancient synagogue buildings and Capernaum.

Modern Jewish synagogues have a well-practiced order or service. There is prayer and worship, there is singing and recitation, there are sermons and rituals. You find cultic objects there like the menorah and Torah scrolls and other items such as prayer books, shawls, and so on. Architecture plays a role, and there might be separate spaces between men and women depending on the flavor or Judaism. Today, synagogues are the center of Jewish communal religiosity.

However, it would be a great mistake to think that the synagogues mentioned in the New Testament resemble modern ones in idea and practice.
The religious center for most 1st-century Judeans was the Temple in Jerusalem. That massive building with hundreds of priests serving in them was the main pilgrimage site, with a sacrificial cult at its core. Local synagogues were more like an afterthought in Judea culture and possibly started appearing in the 4th century BCE. Only from the 1st century CE do we have substantial evidence for their existence in writing and building. They were not meant to replace the Temple’s cult and centrality. What then, were synagogues for?

What is a Synagogue?

First of all, ancient writers such as Josephus and Pliny always mention the aspect of learning. An inscription of an ancient synagogue’s foundation stone found in Jerusalem agrees that “learning the Law” was its main purpose. Regular exposure to the words from the Law would create a communal memory in which people were able to remember all the regulations and foundational stories without reading.
In the 1st century, the Pharisees as a religious party saw it as their duty to go to the common people and instruct them in the Law. We can imagine Pharisaic teachers and disciples using synagogues for just that purpose and naturally gaining some influence as the learned people who uphold the divine Law.

Secondly, synagogues provided a formal space for communal prayer and worship. This function became much more important after the Romans destroyed the Temple. Synagogues then became the institutions that allowed Judeans to continue prayer, worship, and learning together. Jewish teachers of varying traditions would write up minute details of Jewish life and synagogue practices, and they did that to streamline centuries of grown traditions and meaning.
However, in Jesus’ days, there was no set form. Although the Temple liturgy and traditions provided templates (the people who made their pilgrimages to Jerusalem perhaps tried to recreate some of what they had experienced), the way a service was done and who played what role followed loose rules and probably differed from place to place.

There are different words used in Greek and Hebrew to describe Judean synagogues, but the bottom line is always that they were places of “learning” and “praying.”

A Place to “Assemble”

Now, strictly speaking, the Greek word synagōgē means nothing more than “gathering” or “assembly.” It does not signify a building or place although, in the 1st century, the meaning started shifting in that direction. Perhaps the oldest form of the synagogue was the market square or the town gate. Outside of Judea, people assembled in somebody’s house and turned that into a communal space, following the local architecture. For the diaspora Judeans in and out the Roman Empire (many of which the apostle Paul visited), these gathering places would give a great sense of community and knowledge.
For Judeans in Roman Palestine, these village and neighborhood assemblies functioned as public centers. Just as in many religious communities around the world today, churches, mosques, and temples are venues for neighbors to settle community matters, to celebrate and discuss, to meet and exchange information. Therefore, what is called “synagogues” in the New Testament was often, I believe, a multi-purpose community center where the village assembled for events, political discussion, legal proceedings, and learning.

Only a few towns in ancient Judea were wealthy enough to afford a prestigious building dedicated to learning and prayer. Rural people perhaps assembled in the house of the village chief, the markets square, or a converted courtyard. There is simply not enough archaeological evidence to know for sure.
The few known proper 1st-century synagogue buildings (such as in Gamla and Khirbet Cana) that have been excavated and studied share certain commonalities:

Some of the more magnificent synagogue houses do feature decorative mosaics and engravings of Jewish motifs such as the menorah, shofar, and the Temple.

Now we’re coming to the synagogue of Capernaum, the one Jesus often visited and where he cast an evil spirit out from somebody who heckled his teaching. This is where an important scene is going to take place in the next REIGN OF GOD book.

If you go to Capernaum today, the magnificent stone synagogue is one of the main attractions and one of the largest ancient synagogues in Israel. However, it did not exist when Jesus lived there. The ruins are of a 3rd to 5th-century construction as Capernaum was growing into a bigger city.
Now, there are scholars who argue that this limestone synagogue was preceded by another, smaller one, possibly made from local basalt. They point out that the limestone structure is built upon basalt foundations, pavement, and walls that look like they belonged to an older building.
However, there is a problem: The limestone synagogue was built above a residential area which was used well into the fourth century. The basalt foundation seems to have been part of the limestone synagogue in the first place. Before it was built, the builders demolished and cut through houses adjacent to it to make space. Those houses were from the 1st to 4th century CE as proven by coin finds there.
If another synagogue had been in this place earlier, it would have been much more modest. It might have been a house synagogue similar to the one found in Khirbet Cana, but even simpler and smaller because so far no evidence of stone pillars and other more sophisticated structures have been found.

Did Capernaum Have a
Synagogue in the First Century CE?

Only a part of Capernaum has been excavated, so a 1st century synagogue could theoretically be hiding under the soil somewhere nearby. But without any archaeological evidence, we are again left with probabilities and imagination to draw up the synagogue that Jesus visited when he was there.

One hint that we can find is in Luke 7:3-5.  The Capernaum villagers mention to Jesus that a Gentile “centurion” had built a synagogue.

When the centurion heard about Jesus, he sent to him elders of the Jews, asking him to come and heal his servant. And when they came to Jesus, they pleaded with him earnestly, saying, “He is worthy to have you do this for him, for he loves our nation, and he is the one who built us our synagogue.”

Not every scholar takes this story at face value, but it is not inconsistent with Capernaum’s position as a border town and the fact that there were “god-fearing” Gentiles who followed the Judean religion. Could it be that an officer from prince Herod’s military offered money to also buy the goodwill of the villagers? The Herodian army included people from different nations. If he was a Roman citizen, he could have been from North Africa, Turkey, Spain, and other far-off places.

Obscure as the Luke passage is, it allows speculation of a dedicated synagogue building in Capernaum. It sounds as if the villagers themselves didn’t have the means to pay for the construction themselves and that they rather accepted the gift from this foreigner than going with whatever they had used before.

As I described in a previous article, Capernaum was not much developed in the 1st century: no Roman amenities or harbor fortifications. It is unlikely that a synagogue stood out as an exception. The criteria for describing Capernaum’s synagogue can then be as follows:

There are many questions that I cannot be solved readily: Could the columns be of wood or stone? How many windows would be typical? How thick was the ceiling? I tried to reconstruct the hypothetical ‘centurion’s synagogue’ from these breadcrumbs, taking a minimalist approach:

The ‘Centurion’s Synagogue’ I painted here is a deliberately unexciting rendition, reflecting that most synagogues of the time were probably not much more than a big house with a spacious courtyard or hall. It lacks the polish or beauty of a ‘sacred space’ that later synagogues would express, but still impressive for a fishing village like Capernaum. (I left out surrounding buildings for clarity.)

The building is oriented in a way to let light in from the south side (we are looking at the east side). I decided to have it be covered in plaster in and out. Although most family houses were not plastered inside, the centurion’s money might have allowed for it so that it would not be too dark.

Inside, we enter a porch supported by wooden columns (cedar trees?) before stepping into the hall. We see a floor made from basalt cobbles and pound earth. The lectern is an ad-hoc design inspired by Roman furniture. From this perspective, the book niche and seats for the quorum are hidden from sight.

Looking at the finished images, I think I could have drawn the walls much thicker and perhaps added another door leading to a court on the other side of the building. I also wonder what other kinds of furniture or utensils would be appropriate. Would there be a cabinet with items that villagers used for other meetings? Lamps? A chair for the lector? These images are imperfect reconstructions, but a good enough first attempt to provide the visual template for advancing the story. The research continues…

Ancient Rome and Palestine had some beautiful architecture, much more sophisticated than the simple synagogue here. For this article, “The Ancient City: Life in Classical Athens & Rome” by Peter Connolly and Hazel Dodge has given me great inspiration (especially the door part). It features stunning illustrations and easy to read texts that place you right back into the world of antiquity.