I was recently asked how I came up with the look of Jesus in my comic. The question is justified since I chose to draw him very differently from the cliché Christ look of our time: a long-haired Caucasian guy in a long white robe and a red cloth thrown over his shoulder (where, o where did that come from?)… since little of that is historically probable it was my aim to challenge this image—and come up with a Jesus who would look much more like the 1st century woodworker from the Near East that he was.
But how should I draw him then? Are there any hints in scriptures or archaeology for pinpointing some clues about his appearance: his skin color, dress etc? I confess that I struggled with these questions. In this two-part article, I want to talk about my method and how I finally arrived at Yeshua’s (Jesus’) look in The Reign of God.

To be clear: the gospel writers give us almost zero information about how Jesus looked. That’s typical for ancient biographers who seldom showed interest in their heroes’ appearance. Another difficulty is the Jewish law which prohibited human paintings and sculptures, so there is no early local church tradition in pictures. The first images of Christ come from the outside Roman realm. But they follow idealized cultural stencils of pagan gods and men, not portraits of a particular person from history.
This leaves us with very little specifics about him… but what we can do instead is to learn what a typical Judean of the 1st century looked like: external clues coming from historical research including archaeology and a bit of genetics. And perhaps we find some indirect hints in the Bible and other early Christian traditions that we can assemble as internal clues. I want to start with clothing since it is the easier topic.

Since we have almost no pictures of ancient Judeans, we must rely on written records such as the Talmud and artifacts. What archaeologists have unearthed may surprise you. Unlike what movies want you to believe, Judeans didn’t walk around in long “oriental” garbs. Flowing robes were reserved for rich folks. The other 99%—this we know fairly well from textile excavations in Israel—wore the same general attire as other people in the eastern Roman Empire. This can give us a good sense of Jesus’ hypothetical dress. As the gospels say nothing special about it, we can assume that it didn’t differ from that of others.
So let’s take a look at 1st century couture!

Everybody Gets a Tunic

Almost every man wore the universal basic dress of antiquity: a simple tunic (“undergarment,” Greek: chitōn) that covered the upper body and thighs. This was just two pieces of rectangular wool cloth sewn together, with holes for arms and head. In most cases, they didn’t even have sleeves but looked like ponchos. It often had two blue or purple stripes (clavi) running down the shoulders to the bottom.
Many tunics found in Israel are colorful, with yellow, brown and red as main colors. But dying was an extra cost. Poor rural laborers wore undyed, cream-colored tunics.
Now, there is a famous tradition about Jesus’ tunic in John 19:23: Here we learn that it was not sewn together from two sheets.

But the tunic [chitōn] was seamless, woven in one piece from top to bottom,…

Yeshua in my book does not yet wear that particular tunic, but a rougher, reddish-colored one. 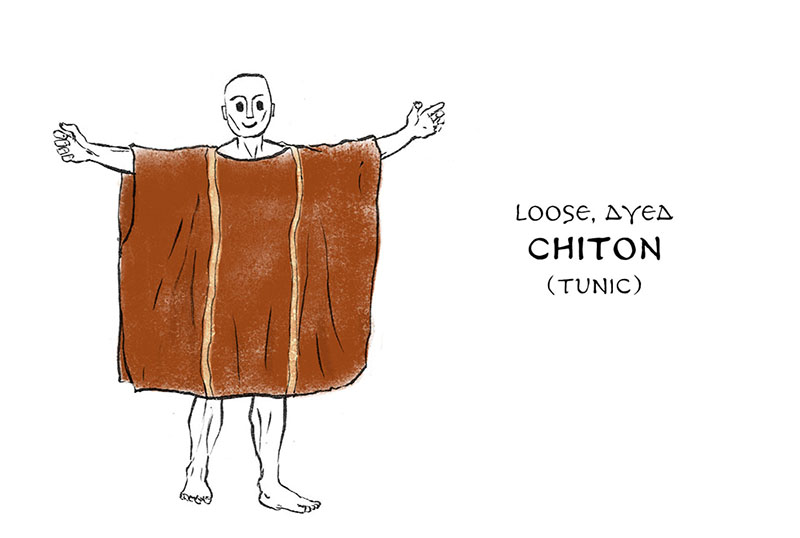 A belt not just secured the tunic to the body, it also stored money. (That revolutionary invention we call pockets would not spread for another 1,500 years.) Hollow money belts or linen girdles served to hold pouches and other things. That’s why Jesus says “no money in your belts.”
Sadly, I couldn’t find any archaeological evidence for belts. Roman soldiers’ belts looked quite similar to belts today, so it was one idea I could follow.
Jesus allows his disciples to wear them and in Luke 12:35 he even tells them to be girded (=prepared), albeit in a more spiritual sense.

Let your loins stay girded and keep your lamps burning…

Although there is no direct evidence, it’s easy to conclude that he wore a belt. (Strangely, there are several meaningful references to the apostle Peter’s belt in the New Testament.) I gave my Yeshua a broad leather belt fit for a manual worker who would need something sturdy to hold tools and tool bags. A round buckle design was chosen to make it more distinguishable.

While Romans did wear laced shoes and boots of all kinds, not plenty of them are found in Israel. Judeans wore simple, unnailed sandals of cow leather. Pictures and artifacts tell how they looked like and functioned. In winter, socks were worn, too. 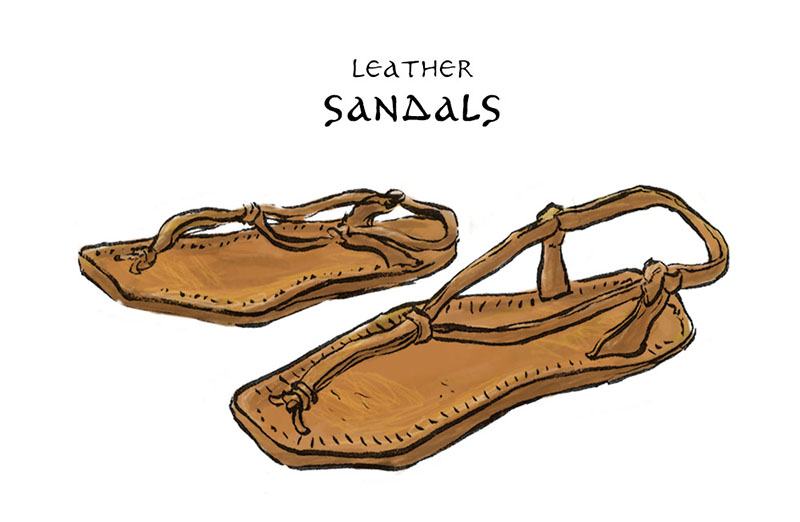 When I looked at old photos from rural Palestine I saw that many farmers walked barefooted. That is still true for many poor rural areas of the world today. My intuition tells me that most farmers probably had no footwear at all, although in biblical times people considered them of little value (Amos 2:6).
There is an interesting remark by Jesus about shoes and other items when he send his disciples on a preaching mission (Mark 6:8-9):

He charged them to take nothing for their journey except a staff—no bread, no bag, no money in their belts— but to wear sandals and not put on two tunics.

So, Jesus allowed disciples to wear sandals… or did he? In the Gospel of Luke (10:4) he says the opposite of Mark (and Matthew)! Did he himself walk barefooted at some point? Later (Luke 22:36), he changes the rules. Whatever the answer, I thought it would have been more plausible for a wandering laborer like Yeshua to have footwear, so I gave him a typical set of leather sandals. 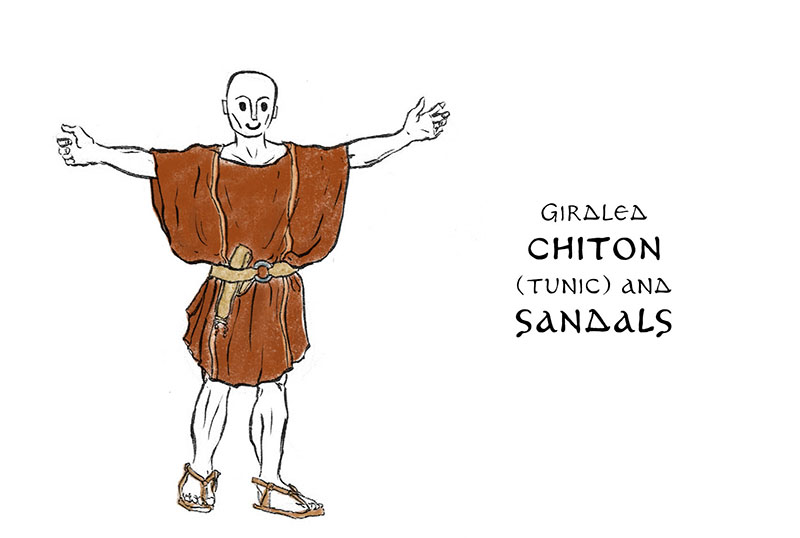 The Mantle of the Pious

“Mantles” are often mentioned in the Bible, but it is a misleading term. A mantle in antiquity was nothing more than a large piece of cloth wrapped around the body. In Greek, this is the himation, or Hebrew talit. They were decorated with either long gabled stripes or “gamma” patterns. The gamma mantles were more colorful while the stripe mantles were dyed with saffron.
When you look at traditional clothes from around the world, you get a sense of what role this might have played in people’s lives. Mantles protected the body from the elements. At night, people used them as blankets. I guess in biblical times, people wore mantles in all kinds of ways according to the situation. They also had clasps and pins to hold them together as cloaks.
A specialty of Judean culture was that mantles would have ritual tassels, tsitsiyot, on every corner, in observance of the commandment in Numbers 15:38.

Speak to the people of Israel, and tell them to make tassels on the corners of their garments throughout their generations, and to put a cord of blue on the tassel of each corner. 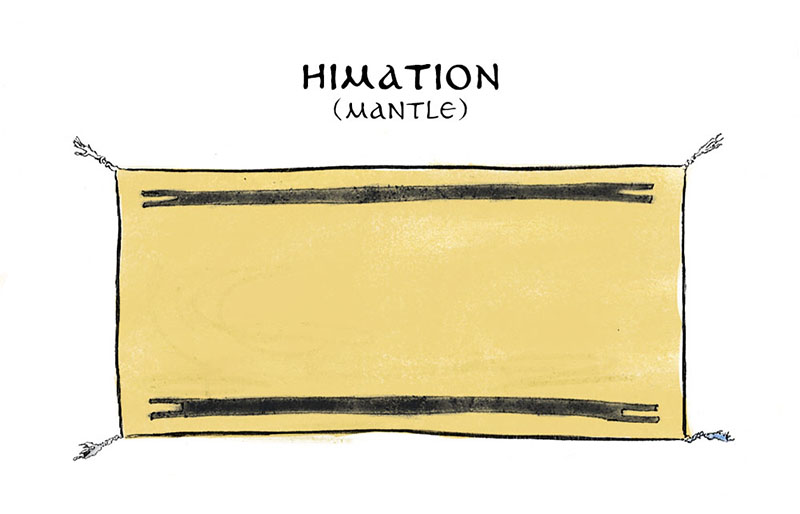 What are internal clues for Jesus’ mantle? The famous scene from John 19:23 gives us a hint:

… they took his garments [himatia=mantles] and divided them into four parts, one part for each soldier; also his tunic.

Did Jesus have more than one mantle? Or is himatia a catchphrase for “clothes”? In any case, another evidence for Jesus wearing a mantle comes from Matthew 9:20 and Luke 8:44:

And behold, a woman who had suffered from a discharge of blood for twelve years came up behind him and touched the fringe of his garment,…

Again, the Greek is himatiou, and the “fringe” (kraspedon) is often interpreted as the tsitsit. However, it might actually mean the decorative stripe. Jesus is on record criticizing people who showed off their piety with their long kraspeda. In my book, I gave Yeshua a yellow stripe-mantle to make it more memorable.

This is a tough one. Did Jesus wear something on his head? There is no record. The external evidence on what Judean farmers wore is also inconclusive. Nevertheless, I gave my Yeshua a head-kerchief. It is hard to imagine that any farmer, fisher or woodworker (such as Jesus) would have toiled under the harsh sun bareheaded. Traditional farmers all over the world wear some kind of cap, turban or kerchief against heat and sweat. Photos from 19th century Palestine show peasants with headgear in what we today would call “Arab” style. My personal conclusion is that rural workers did wear some sort of similar cloth wrapped in various ways.
I bought a kufiyyah to try it myself. This typical Palestinian headscarf was and is still worn by various peoples of the Near East, including Jews. I played around with it and found a way to cover more of my neck, and decided this would be Yeshua’s habit as an outdoor laborer. So I finally came up with this look: 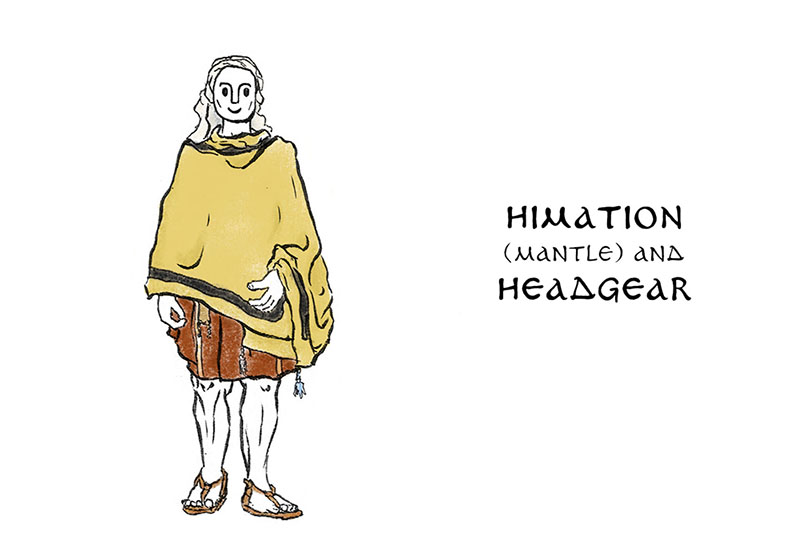 The look of a 1st century rural Galilean

So, this is how I came up with Yeshua’s dress. Now, keep in mind that people of different professions such as priests, Pharisees, Essenes etc, would have chosen a very different clothing style from everything said above. Dress was important for people to communicate their class, group identity, religiosity, and gender, “a tool that helped ancient people understand, order, and navigate their world.” The point here is to, again, describe what John Doe from Goatville, Galilee would have clothed like, not Sir Shlomo van Goldnail from Temple Mount 5.

In the next article, we will look at Jesus’ physical features!

2 thoughts on “What did Jesus look like? — Part 1: Clothing”