In this article, I talk about Jesus’ possible skin color and Jewish genetics. The question of Jesus’ body is complex as it is contentious. I won’t go into theology but strictly talk about the appearance of the historical Jesus. I can’t give final academic answers here but offer some considerations that went into finding my image of Jesus for my book.

A sturdy man of color

Let me start with the conclusion:
As an Eastern Mediterranean Judean, the historical Jesus could have probably mingled with a crowd of Palestinian farm workers today. He was likely short to average in height due to unfavorable nutrition throughout his life. Working outdoors gave him sunburnt brown skin. As a laborer who had to travel long distances, he was probably slim but of a sturdy, muscular build. I imagine him with big hands hardened by work and fairly hairy. Something like this:

This article is about how I came to this conclusion: to imagine what the body of a typical Jewish man from ancient Galilee might have looked like.

This shouldn’t be such a difficult question. After all, some will say, Jesus was a Jew—so he must have looked Jewish, simple as that. This is the opinion I sometimes get in conversations, with a knowing smile that says “How smart of me not to think of Jesus as a blonde, white man.”
The underlying presumption here is that Jews have features that make them different from other people, particularly “white” Europeans. The conversation would often reveal stereotypes about their alleged hair color, “olive-brown complexion” or even leg shape… The reality is that Jews (like any other ethnic group) show a broad variety of looks, not at least because they are scattered around the globe and often indistinguishable from the general population they have settled in.
If Jewishness could conveniently predict physical appearance, how come then a Mark Zuckerberg and a Moshe Katsav belong to the same ethnic group? The only ancient Jewish hair of a male ever discovered is red, a throwback to the European stereotype of the ginger-haired Jew. So which one is it?

The thought behind the non-white Jesus is that Jews, as they are originally from around Palestine, would look like people there. This leads to another classic: “He looked Middle Eastern.”
This is another unhelpful generalization. People in the Near/Middle East have all kinds of hair, eyes, skin tones, and body shapes. Judging by this, Jesus could have well fit the cliché blonde and blue-eyed guy with light skin!
Another problem with the “Jewish” and “Middle Eastern”look is that it presumes people of antiquity to have been similar to modern Jews or “Orientals.” However, migration can mess up this idea. What we today call “Turkish” people, for example, are descendants of Greek, Armenian and ancient local tribes who mingled with Turkic tribes. Those arrived from central Asia only a thousand years ago.
So how can we know what Jews/Judeans in ancient Rome looked like?

As a start, there are skeletal remains of 1st century Judeans which show us their body shape and size. According to historian Joan E. Taylor,

Judaeans of this time were closest biologically to Iraqi Jews of the contemporary world. In terms of a color palette then, think dark-brown to black hair, deep brown eyes, olive-brown skin. Jesus would have been a man of Middle Eastern appearance. In terms of height, an average man of this time stood 166 cm (5 ft 5 in) tall.

Though Taylor uses the “Middle Eastern, olive-brown” card here, she is specific: Iraqi Jews and how many of them look. I confess that I found this information only recently. For my future comics, it will be worthwhile to study old photos of Iraqi Jews.

Another idea is to look at evidence from ancient paintings. Unfortunately, because of Jewish law and the lack of portrayals by other nations at that time, there is almost no information there. The beautiful frescoes in the 3rd century Dura-Europos Synagogue in Syria are the best we have. They show Jewish men who all have black hair, light skin, and dark eyes.
However, I can’t detect any feature that would scream “Middle Eastern!” Ancient paintings follow certain templates rather than giving a snapshot of real people. And the artist’s prowess and intent, material limitations, and color degradation over time might all have influenced these frescoes. 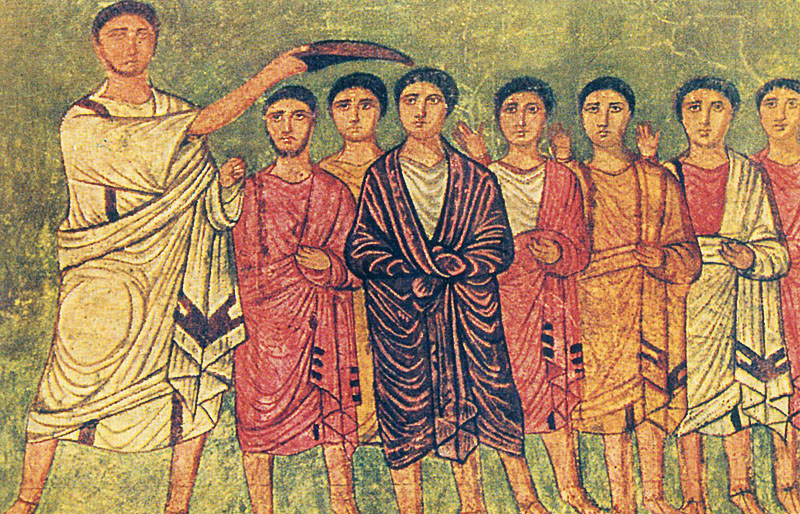 Sadly, there isn’t much else to give us clarity. Without the information about bones that are close to “Iraqi Jews of the contemporary world,” I turned to historic photos.

Of course, there are no photos of ancient Rome. But the US Library of Congress’s website has an archive of snapshots from 19th century Palestine. They give us at least a hunch of what life in the Holy Land could have been like before modern development.

These photos show local people unspoiled by urban lifestyle: Fishermen in Galilee. Samaritan scholars. Jewish rabbis. Bedouins in their tents. Arab farmers… all living in a world without electricity, paved roads, or motors. Rural areas used to change very slowly, and the folks in the photos with their dependency on the environment probably had a lot in common with rural Judeans 2000 years earlier. They might have understood Jesus’ parables with their rural imagery very well.

I believe that lifestyle has a strong influence on our bodies. Working in the fields, exposed to the elements, eating sparsely from what soil and rain provide, changes how they look and move. I think that Jesus looked edgy and brown because of that lifestyle as a physical laborer in the Galilean province. Like most of his peers, he might have looked older than 30 years.

Still, is it legitimate to look at 19th century Palestinians and conclude anything about 1st century Judeans?  There is one more element in the puzzle that supports it: genetic genealogy.

Research of human ancestors has gotten a lot of steam in the past ten years. I can’t go into details here, but the field of genetic genealogy deals with migration and ancestry based on genetic data like mitochondrial DNA. Scientists cluster people based on their shared genetic attributes (so-called haplogroups) which they inherited from common ancestors. Turns out, some specific haplogroups can be found among Jewish populations. The vast majority of today’s Jews share the same genetic roots.
But wait, isn’t Judaism a religion? Well, the controversy as to what makes a Jew a Jew is endless: religion, culture, an Israeli passport, or your mum…? The conundrum can’t be solved here. Shaul Magid of Indiana University says: “The very notion of ‘Jew’ and ‘Jewishness’ is far from a stable category,” and has to be re-examined, negotiated, re-defined according to circumstances.

Religion and culture aside, the important point here is that Jewish haplogroups have originated in the Eastern Mediterranean region. Whether you have Ashkenazi or Sephardic or Yemenite Jews, most of their genetic ancestors do stem from the Middle East.
Another fact proven by research is that if you go further back in the past, we see that people of the Eastern Mediterranean share the same ancestors. Jews, Druze, Palestinians, Samaritans, Jordanians, Lebanese, etc… are closely related. We can assume that Jews and Arabs at the time of Jesus looked similar, not at least because of the same rural lifestyle.

Although it’s hard to be less general, in the end we are left with a statement that uses the “Middle Eastern” card again. But combining evidence I to IV should allow us to get somehow close to what Jesus and people around him might have looked like. Maybe genetic research or bone studies will reveal more about the general appearance of ancient people. That will hopefully erode racial stereotypes about Jesus and about Jews that persist to this day.

What was Jesus’ Race?

The question of Jesus’ body leads to the question of race and racial identity. This can be a delicate topic for some people, as part of their self-understanding hinges on Jesus Christ’s identity. Also, me as a German talking about ‘Jewish bodies’ and ‘genes’ might cause discomfort or even huff among some readers. Indeed, learning about Jewish haplogroups alone made feel queasy. How to talk about ethnic identity and bodies in a considerate way?
I have avoided the word “race” so far, as it is a subjective social construct, not a biological reality. I will address race and racism more fully in one of the next posts. Until then I recommend this article which goes into the genealogy I mentioned above: The Biggest Jewish Genetic Myths of All Time

The next article will talk about Jesus’ face—an exciting topic!