James “the Greater” was one of Jesus’ closest disciples, but he is often eclipsed by his more famous brother John. In this article, I will take a look at what we can know about this apostle, trying to shape a character profile.

During his time with Jesus, James, son of Zebedee, displayed some questionable behavior but nevertheless was a member of the trio of core disciples, Peter, James, and John (Kepha, Yaakob, and Yochanan). He became an influential speaker for the Christian message and was the first of the Twelve Apostles to lose his life for his faith.

Son of a Fisherman

After going a little farther, [Jesus] saw James and John, Zebedee’s sons, in their boat repairing the fishing nets. At that very moment he called them. They followed him, leaving their father Zebedee in the boat with the hired workers. (Mark 1: 19-20) 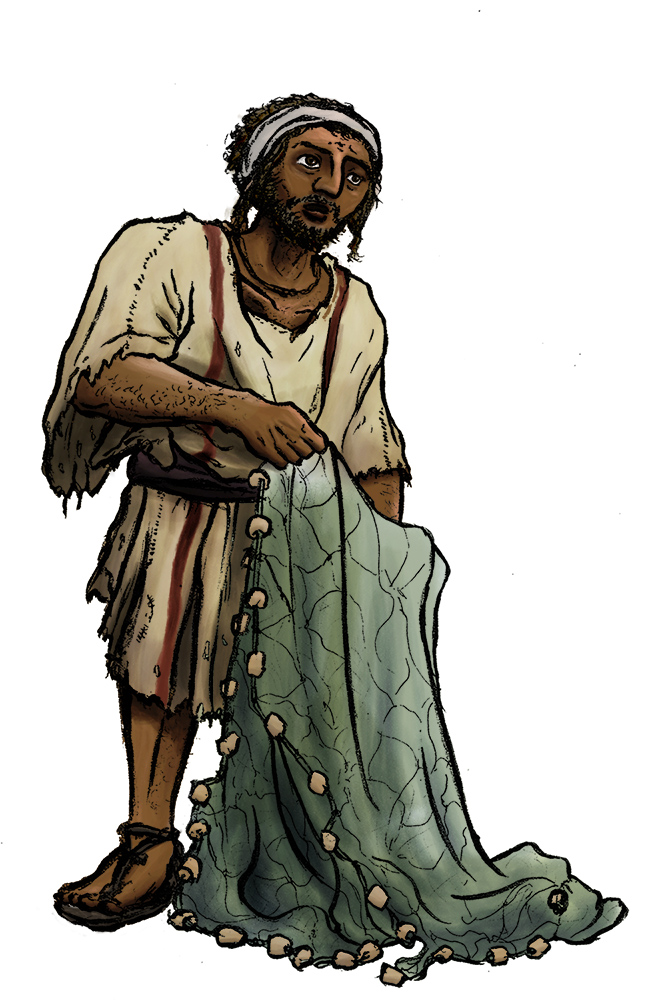 When Yaakob met Jesus for the first time, he was a fisher at the Sea of Galilee. Like most people back then, he simply fulfilled his part in the family trade, working with the family of Simon and Andreas as partners in this little fishing town called Capernaum.
Scholars have pointed out that “hired workers” imply that father Zebadyah (Zebedee, “Yah has given”) was a wealthy business owner with a large boat. Indeed, only a larger boat needed more than four men to handle—but we don’t know if those workers were really there to help fishing and not for other tasks. Considering the exploitative fishing rights system, Zebadyah was hardly a “middle class” entrepreneur but perhaps he did have a role as senior fisherman dealing with local brokers. I can imagine him using his boat to transport goods and people during the off-season.

It’s likely that Yaakob was the son of a rather well-connected peasant. Nevertheless, he had to engage in the hard daily labor of fishing; cutting his hands, dragging heavy loads, and disentangling and cleaning nets during the drowsy morning hours after a long night’s work.

What went through Yaakob’s mind in those moments, when the sunlight was creeping from the eastern hills over the lake? He surely discussed his daily concerns: food, family, boat repairs, and tax payments. But did he ever dream of leaving this kind of life behind? Did he ponder on ancient stories of biblical heroes, or recent Galilean rebels such as Judas of Galilee? Did he discuss the local Pharisee’s teachings or the pagan lifestyle of citizens in nearby Tiberias? What did he think about this new Roman prefect Pilatus who recently had provoked entire Jerusalem with images of the emperor?
Whatever his thoughts were, Yaakob’s life changed when Jesus appeared and invited him to join his mission: to proclaim the beginning of a new age. When Yaakob witnessed that Jesus had special powers to restore the minds and bodies of people in Capernaum—folks he had known since forever—he followed the call.

How old was Yaakob?

At this point in his life, Yaakob was most surely married and a father, assuming that all the Twelve Disciples were Judean adults (= at least 13 years of age). But how old might he have been?

First of all, it is not clear if Yaakob was older than his brother Yochanan. The written record is inconsistent with their name order. Church tradition treats Yaakob as the older one, and since Yochanan is remembered to have lived a long life I agree.
As we will see, Yaakob became a leader in the early Christian movement. It’s hard to imagine he could have held much authority as a youngster. At the same time, the age difference between him and Yochanan (who was quite young) couldn’t have been too big (10 years maximum). That’s why I think Yaakob was likely in his mid-20s when he restarted the church in Jerusalem. For my story, he is 24.

The writer of the Gospel of Mark portrays Kepha, Yaakob, and Yochanan as the disciples closest to Jesus, making them his inner circle (‘The Three’). They were present at significant private manifestations of Jesus’ power: the raising of a dead girl, the transfiguration, special instructions on the Mount of Olives, guarding (and failing to guard) Jesus in Gethsemane Garden… They gained special insight into Jesus’ work and teaching, making them trusted companions with a strong conviction in him. The transfiguration episode might have played out as an intense personal and emotional moment between Jesus and the Three when Jesus initiated them into his intimate heart and mind.
I think Jesus chose them because of their personalities and strong religious zeal. It is them who asked him about scripture and future events. They expected a cataclysmic change and that Jesus would be at the center of it. And Yaakob hoped to reap the benefits of that before anyone else.

It usually is ‘Mark’ who lashes out at Jesus’ disciples and their ignorance, but when it comes to Yaakob and Yochanan’s over-ambitious and self-seeking attitude, even ‘Matthew’ and ‘Luke’ are in agreement. This becomes clear in some key episodes as Jesus and the Twelve are heading for Jerusalem:

And [Jesus] sent messengers ahead of him, who went and entered a village of the Samaritans, to make preparations for him. But the people did not receive him, because his face was set toward Jerusalem. And when his disciples James and John saw it, they said, “Lord, do you want us to tell fire to come down from heaven and consume them?” But he turned and rebuked them. (Luke 9:52-55)

Yaakob and Yochanan were convinced that Jesus was a man of God worthy of respect. They had become so intimate with him they thought his divine power had rubbed off on them, thinking fire would fall from heaven at their command. And even though Galileans had rejected Jesus before, Samaritans were deserving of punishment for it, in their eyes. This is a narrow mindset of zealotry and exclusivism.

2) Asking for power and glory

And James and John, the sons of Zebedee, came up to him and said to him, “Teacher, we want you to do for us whatever we ask of you.” And he said to them, “What do you want me to do for you?” And they said to him, “Grant us to sit, one at your right hand and one at your left, in your glory.” Jesus said to them, “You do not know what you are asking. Are you able to drink the cup that I drink, or to be baptized with the baptism with which I am baptized?” And they said to him, “We are able.” (Mark 10:35-39)

Yaakob had left a stable family life, now he wanted to make sure that he would get something back for it—secure his share as he was approaching Jerusalem. As the senior male descendant, he might have felt the weight of responsibility to do so. He thought he ‘deserved’ to be higher than others, not thinking through what Jesus asked of him. The other disciples became “indignant” when they heard about that betrayal and opportunism. Jesus went on to tell them his definition of leadership.

These passages portray the Zebadyah brothers as opportunistic and blinded with hubris. Their motivation to follow Jesus was misguided. There isn’t a lot of enlightening information about Yaakob, except for one brief mentioning in the Acts of the Apostles: his death in the year 42 CE.

Yaakob was the first of The Twelve Disciples (apart from Judas) to die, and the circumstances around his death might give us some valuable clues about his role, character, and life.

About that time King Herod began to harass some who belonged to the church. He had James, John’s brother, killed with a sword. When he saw that this pleased the Jews, he arrested Peter as well. This happened during the Festival of Unleavened Bread. (Acts 12: 1-3)

‘King Herod’ in this passage is Agrippa I who came to power in 41 CE as the first proper Judean king in decades. As he was trying to pander nationalistic sentiments and the powerful Sadducee Party, he went after some known troublemakers: Jesus-admirers in Jerusalem.
Agrippa did not try to destroy every single adherent of this messianic movement but just targeted its most prominent leaders. If Yaakob was first to go down it probably meant that he had played an active role.

To be precise, Agrippa did not have the right to put people to death. This was the traditional prerogative of the High Council of priests. They could condemn somebody to death (which happened rarely!) but then had to ask the Romans to carry out the execution. However, the time of Yaakob’s death happened at a moment of power transition, without a Roman prefect in charge. And the Herodian family was known to ruthlessly kill political rivals. Yaakob’s death was probably set in motion by Agrippa and endorsed by the elite priests or vice versa. They saw the chance to get rid of and make an example of some inconvenient folks.
Under Mosaic law, death by the sword was highly unusual. Deuteronomy 13:12-15 would stipulate “death by the sword” only for a so-called maddiah: a preacher of declension, or worse yet, someone who seduces a substantial number citizens, a demagog to worship other gods. Yaakob was struck down or stabbed (not decapitated) because authorities saw him as a blasphemous rabble-rouser.
Agrippa favored the ruling Sadducee party and acted as a protector of the Temple, helping to restore order. Yaakob’s execution proved to be popular among the Jerusalemites, perhaps being relieved to see this dangerous zealot preacher go. He would be around 39 at his death in the spring of 42 CE.

Remembered as a Servant

Church chronicler Hegesippus (2nd century) describes Yaakob as a kingpin of the people, a servant of God and all Israel. From church writings and the gospel episodes, we can sense a theme of ‘leadership through serving others’ echoing through his life. It could be that people remembered Yaakob and Yochanan for their exemplary service. This quality contrasts their arrogant behavior in front of Jesus and describes perhaps their struggle: to earn their authority through humble care. Thus, the core themes of Yaakob’s life are the following:
1) Are you just following Jesus for your own profit?
2) Can you become a leader by becoming a servant to others?

For my next book, I imagine Yaakob as someone with an outspoken ESTJ or ESTP personality. Hoping to escape the drudgery of fishing, he strove to be close to a popular holy man like Jesus. He truly believed Jesus had divine insight and wanted to make sure he and his family would be rewarded for his loyalty. Proud and sensitive, he Jesus cut him down to size. I’m going to portray Yaakob with rather conservative religious values.
After Jesus’ death and resurrection, he dedicated himself to revive the movement. Profiting from intimate knowledge of Jesus’ teaching, he likely continued to seek position, yet fell behind the strengthening authority of Kepha and Yochanan. He learned how to lead through service—something that Jesus had insisted on. He stood out, preaching Jesus as the risen Messiah and criticizing the Temple elites, which led to his early death.

Special thanks to Laura Guckert, theology student in Heidelberg, for useful literature.