There is huge confusion about the identity of the New Testament person called “John.” Tradition and modern research attach contradicting identities to various Johns, which makes it hard to cut through the jumble and find the historical core of this figure. What is sure is that the Apostle John was one of Jesus’ closest disciples. Here, I will create a character profile for the next book of THE REIGN OF GOD.

The Aramaic name of John was Yochanan, meaning “God has been gracious”—a common name at that time. Much of what I have said about his older brother Yaakob/James applies to him as well: Before Jesus called him, he was an ordinary Galilean fisher boy in Capernaum, growing up with hard work and conservative values. He shared his brother’s ambition for status and power, as well as his hot temper. After Jesus’ death, he learned to be a leader through service and wisdom. Because of so many books associated with his name, Yochanan’s legacy is much larger than Yaakob’s, but we have to look closely to see his individual traits during the time he was with Jesus. 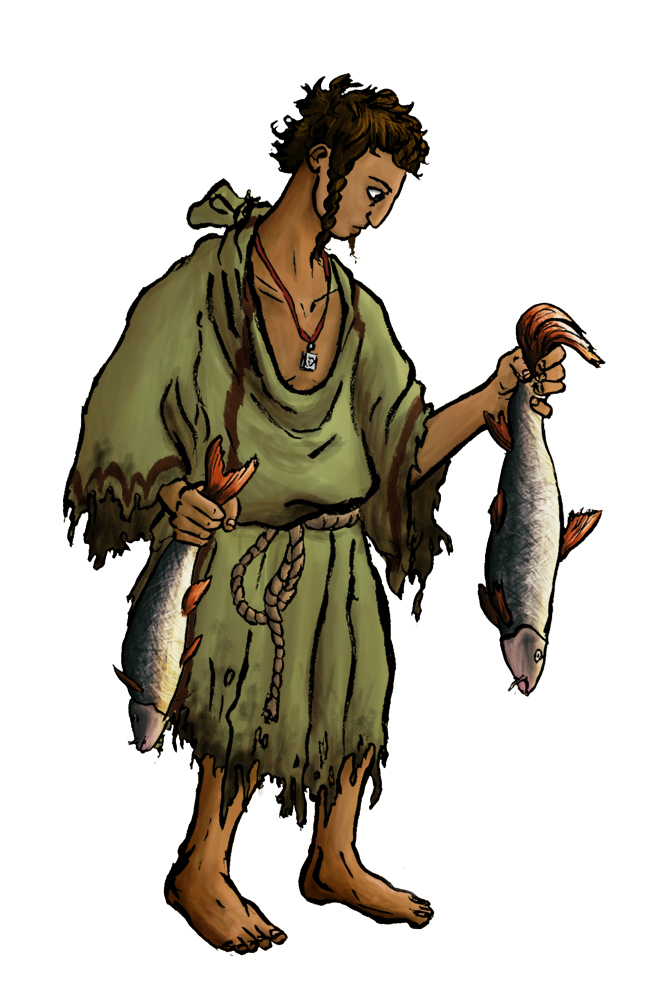 Since Yochanan and Yaakob are often depicted as acting and speaking together (a contrast to the brothers Simon Kepha and Andreas!) it’s possible that the two either shared the same mindset or that one of them was dominant, dragging the other along. Even Jesus lumped them together when he gave them a collective nickname: “Sons of Thunder” (bene r’m). (Did he think of Castor and Pollux, the heavenly half-twins of Zeus from Greek mythology whom sailors venerated to bring good wind?)
But were they really close or has church memory bundled two men of different personalities together? Might the collective nickname “Sons of Thunder” actually not say anything about them but about their thunderous father?

I speculate that it was Yaakob who was the older, more aggressive brother. Young Yochanan might have just followed along, imitating Yaakob and what he said. Later, in the Acts of the Apostles, Yochanan is always seen in a team with Kepha. Kepha is dominant, he acts, speaks, and performs miracles, while Yochanan supports him. Yochanan, although he speaks with “boldness” despite seemingly being an “uneducated, common” man (Acts 4:13), does so in accord with Kepha. I argue that he behaved in a similar way when he was with Yaakob. He tended to copy the attitude of senior disciples. Given his young age, this is not extraordinary.

John said to him, “Teacher, we saw someone casting out demons in your name, and we tried to stop him, because he was not following us.” But Jesus said, “Do not stop him, for no one who does a mighty work in my name will be able soon afterward to speak evil of me.”

Yochanan wants to—unsuccessfully—stop freelancing exorcists and keep things in control. Jesus corrects him.
This faux-pas exposes his narrow-mindedness and immaturity. It is pretty harsh for someone who will be remembered as an “esteemed pillar” of the Jerusalem Church, but in line with what we hear in other passages: His overbearing attitude in Luke 9 when he and his brother want to kill Samaritans who reject Jesus; and the request for glory in Mark 10:35-39.
Just as other disciples, Yochanan probably misunderstood Jesus as an earthly king-to-be. The bravado and opportunism are, to me, signs of youth rather than of deep-rooted personality flaws.

But—was Yochanan really so young when Jesus made him a disciple?

Yochanan became very intimate with Jesus’ teachings. Even though he demonstrated some immaturity, Jesus must have deemed him trustworthy and capable enough. Yochanan appeared later as the right-hand man of Kepha and a courageous witness. That’s why I assume that he was at least 16 years old when he met Jesus in the year 27 CE. That would make him around 18 when he restarted the movement with Kepha, a respectable age in that era. Indeed, in art, he has been depicted as a beardless youth from very early on. I think it’s fair to work with that tradition and depict him as a young man. If anybody questioned his role, Kepha and Yaakob would have backed him.

This would harmonize with the strong church tradition that Yochanan lived a very long life. Church historian Eusebius is insistent on this. He writes that Yochanan “still remained alive in Asia in the reign of Trajan,” and personally met the apostolic fathers Polycarp, Papias, and Ignatius. All of these men confirm this information. If Yochanan truly lived until Emperor Trajan, the earliest date of his death would have been 98 CE. If he was 16 when he met Jesus this would put his minimum lifespan to 85 years! While this sounds unusual for anybody in antiquity, it was also not an impossibility.

A man of that age and reputation must have had tremendous influence in the 1st-century church.  But I’m jumping ahead here. Let’s return to Galilee and Yochanan’s family.

A Family of Jesus Supporters

Yaakob and Yochanan were present at some key moments of Jesus’ ministry, meaning that they spend a lot of time away from home. As adults, they could certainly decide what they wanted to do or not. Still, two young men leaving behind a stable family trade must have caused an existential crisis among their relatives. However, I think this family might have ended up supporting Jesus.
Why? Well, the fact that their father’s name Zebadyah’s is recorded in all four gospels looks like he left some legacy in early Christian communities. Not only that—tradition identifies a woman disciple called Shlomit (Salome) as his wife.

Some women were watching from a distance, including Mary Magdalene and Mary the mother of James (the younger one) and Joses, and Salome. When Jesus was in Galilee, these women had followed and supported him… (Mark 15: 40-41)

This Galilean disciple Shlomit is more prominent in Syrian and Gnostic writings, telling us of her “undivided” faith in Jesus. Although differentiating names and identities in the gospels is tricky, Anglican scholar Richard Bauckham has convinced me that she was the mother of Yaakob and Yochanan (see Matthew 27:56).
It seems this fishing family from Capernaum were ambitious supporters of Jesus. It’s easy to imagine that they would have looked for decisive involvement in his movement.

This is my personal idea for my story, but I imagine Yochanan as a widower. Just as people usually married between age 13-15, maternal death was common. Childbirth was a life and death matter. Perhaps there is something to the later traditions of Yochanan having been chaste… I chose this to depict Yochanan as a thoughtful mystic-to-be who, later in life, would teach about divine love, less concerned with messy earthly matters.

John as a Writer?

The most controversial issue concerning Yochanan/John: the question whether he was the author of several New Testament books—The Gospel of John, the “Johannine Epistles” (letters), and the Book of Revelation.
Orthodox Christians believe that these stem all from one and the same author. But historians and theologians have, for good reasons, vast disagreements about this. There are differing theories as to whether Yochanan ‘the apostle’ is the same person as ‘John the Elder’ who wrote the epistles; John of Patmos, who wrote Revelation, and the John evangelist, whom church fathers later identified as Yochanan.

This is not the space to chew through all arguments (the references below do a good job), but the following scenario sounds most plausible to me:
Yochanan, the apostle, became an important leader in the Jerusalem Church and beyond, establishing communities saturated by his views. Unlike his brother Yaakob, he was not killed in 42 CE, because Paul mentions him to have been present at the Council of Jerusalem in 52 CE (Galatians 2:9). Late in his life, he moved to Ephesus and was instrumental in creating an early edition of the Gospel of John, as there was already the Gospel of Mark in circulation. He tried to correct and complement it. Mark looked perhaps too crude and disorderly for Yochanan’s mystical sensibilities and theology. Somewhere on the way, Yochanan had a disciple who also went by the name of John and was called “the Elder” (an assembly leader?). John the Elder, strongly influenced by Yochanan’s memory and theology, wrote the three epistles. After Yochanan had been martyred in Ephesus, John took part in further compiling and editing the Gospel. I haven’t really looked into how the Book of Revelations might have emerged, so for now, I exclude it from the discussion here.

Why is this important? Because if Yochanan was indeed behind some of these New Testament writings, we can get a sense of the thoughts and concerns he had later in life. The issue is highly complex and there other interesting explanations. I find the theory, that Mary Magdalene was at the center of the Johannine tradition quite compelling. But all I want to say is that at this moment I don’t believe that the mysterious ‘Beloved/Other Disciple’ character in the Gospel of John was Yochanan.

The Yochanan before and after Jesus’ death is a completely different person. The early Yochanan was a typical right-hand-man character, loyal but opportunistic. He showed intolerance toward out-groups but left Jesus behind when real danger was ahead. He was influenced by seniors close to him. Even his family supported Jesus. He probably was deeply impressed by Jesus whose personality and mentorship would be the foundational experience of his life.
After the resurrection, Yochanan emancipated himself from his brother and became closer to Simon Kepha, accepting his authority. ( Remember, the three used to work together as a fishing team. Perhaps Simon had treated Yochanan well, and there was comradeship before they met Jesus.) Through Kepha’s influence, Yochanan became more open, accompanying him to preach among Samaritans and Gentiles.
Only with advancing age, Yochanan found his own voice, reflecting deeply on the extraordinary things he had “seen and heard”: Jesus’ life-changing love, which seemed to him like a “light” in the darkness. This “What we have seen and what we have heard” (Acts 4:20) even echoes into the epistles and the Gospel of John, stressing his and his people’s testimony.

The core question of Yochanan’s character:
1) How does the encounter with Jesus affect you personally (as opposed to what others say about him)?
2) How does it heal and liberate your wounded and anxious heart?

In the faith community around Yochanan, theology, spirituality, and service became more important than the socio-politics represented by Jesus’ brother Yaakob the Just or the zealotry of Simon Kepha. A criticism of Judean religious leaders who did not believe in Jesus also pulsates through the gospel associated with him. He was advocating a radically new, mystical notion: that the life-giving wisdom of God had taken a human form, and that through it, we would have eternal life, too.

Paul N. Anderson: On “Seamless Robes” and “Leftover Fragments” — A Theory of Johannine Composition
Paul N. Anderson: The Son of Zebedee and the Fourth Gospel: Some Clues to John’s Authorship and the State of the Johannine Question
Richard Bauckham: Gospel Women—Studies of the Named Women in the Gospels
R. Alan Culpepper: John, the Son of Zebedee: The Life of a Legend
Bernard D. Muller: John’s gospel, from original to canonical
Stanley E. Porter & Hughson T. Ong: The Origin of John’s Gospel
Lorne Zelyck: Irenaeus and the Authorship of the Fourth Gospel